Maybe the 2016 German GP is the hardest race weekend for Jorge Lorenzo. Three crashes in two days. 11th place on the grid tomorrow. To live a weekend so distressing for the 2015 world champion we have to go back about 10 years. 2006 France GP. When he was a rider in the 250cc class. This is not the first time that Lorenzo crashes twice. It happened at Laguna Seca 2009. However, he did the pole position. It was a race of MotoGP.

In France, the Spaniard fell twice on his Aprilia. However, Lorenzo hasn’t dissolved and then he won the World Championship. In the second case, that of Laguna Seca, fell in qualifying. Twice in 19 minutes. But he made the pole position. Anyway, he didn’t win. Because a dislocated shoulder caused him to go slower. Finished third. 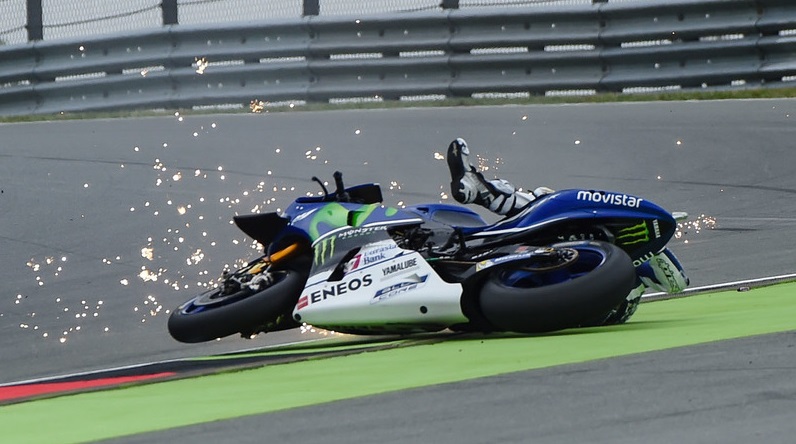 Today, Lorenzo fell twice. 23 minutes of each other. The first at turn 8, 14:39, during Q1, and the second in turn 1, 15:02, in Q2. He closed in 11th place. Yesterday he already crashed in FP1, at turn 11. A hard fall. Because it caused a contusion to the little finger of his left hand. But tomorrow the rain would come. Let’s see if Spanish will be able to take advantage of it as done in Assen.

“Physically I’m fine. I had an inflammation, but now it’s fine. No problem for the race.” Yesterday, Jorge Lorenzo reassured about their conditions after the fall of the first practices of the German GP. World Champion is not satisfied about his bike. The Yamaha is poorly performing. Valentino Rossi’s bike is better. In the end he is third. “It is cold and the track is slippery, you have to be careful with the tires. Maybe the tyres are too hard and it seems to me that no one has a lot of confidence.” added yesterday Lorenzo. However, tomorrow the bad weather might help the 2015 world champion.