Ranking Podium – When you want to understand who is or has been the biggest driver of all time you have to consider always the numbers. The numbers never have absolute value. Today, the pilots run 18 GP at a year and, in the past, they were sometimes less than half. It is true, though it worked in more than one capacity, but careers were also decidedly shorter.

The pilots began to go after it stopped before. Valentino Rossi wins the special ranking podium of the Moto GP without problems. The Italian rider runs from 1996 and he is still in business after 21 years, while, such as, Giacomo Agostini began in 1963, doing a few races and ran only 14 years. The numbers give us ten nom and a few surprises. At the first three positions of the podium ranking, in fact, we find Rossi, Agostini and Dani Pedrosa. Then, Jorge Lorenzo and Angel Nieto with the same place. In sixth place, there is Phil Read, capable of winning titles in 125, 250 and 500. Then the great Micke Hailwood before Max Biaggi, Loris Capirossi and a name that the youngest of you maybe don’t remember: Jim Redman. 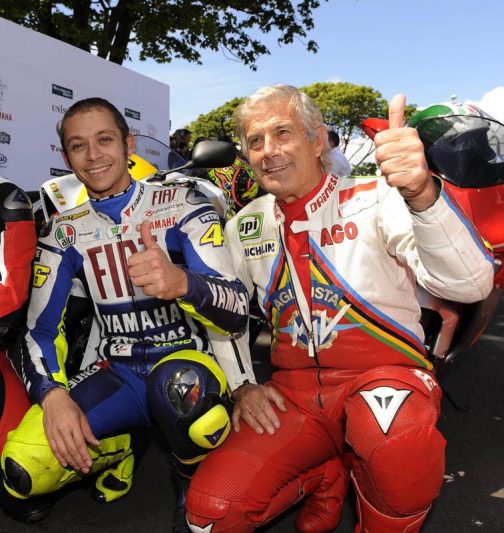 This is the Ranking Podium of Moto GP:

The special ranking of podiums is dominated by Italy, but there is also a lot of Spain. Italian 4 (Rossi, Agostini, Biaggi and Capirossi) and Spanish 3, in the first 10 total positions. The rider who has won more races is Giacomo Agostini followed by Valentino Rossi. The King of the second and third places is the Doctor. The Honda rider Dani Pedrosa has been on the podium despite he doesn’t never won a title in the major class. Rossi and Agostini together have won 24 titles. In 500 class, Agostini won 8 titles, Valentino Rossi won 1 title in 500 and 6 in Moto GP.