The Desmosedici GP is different from the Yamaha

Ducati is trying to make the adjustment to Lorenzo’s bike as fast as possible. In fact, the Desmosedici GP seems to need a different driving style than Yamaha, especially under braking. On the first day of testing at Sepang, Lorenzo closed in 17th place, a disappointing result for his first run on the Ducati. “I was surprised to be so slow.” said Lorenzo at the end of the day. “I didn’t expect it to be so difficult. There is still a lot of work to do, especially under braking. I always held back earlier with Yamaha, so now I lose a lot. 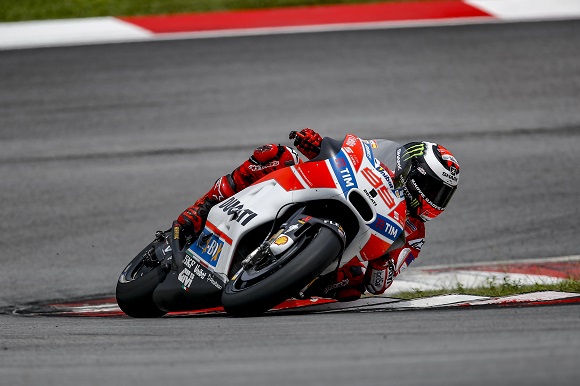 This bike must be driven differently. I still haven’t figured out how to bring out the best. So, for me it was difficult to fit in among the fastest. With this bike you have to brake later and insert with the handle still pulled. This is the style of Dovizioso and is very different from what I had at the beginning of the test.” added Lorenzo.

Jorge Lorenzo will try the new rear braking system in Australia. The Spaniard had already an experience with this alternative braking system. Because he tried it on his Yamaha a couple of years ago. But the first was Mick Doohan, who used it after the terrible accident at Assen in 1992. When he risked losing his right leg too.

Two years ago, Jorge Lorenzo wanted to ask Santa Claus for a Yamaha stronger braking. What has always been the strong point of the Japanese brand. And Yamaha fulfilled his wish. Now, Ducati must guarantee Jorge Lorenzo the perfect rear braking system to Jorge. Because the goal is to win the MotoGP World Title again.