MotoGP Title – Jorge Lorenzo is concerned. GP after GP he is increasingly difficult to defend his MotoGP title. The next Sunday he will run at Silverstone and Marquez is still too far away. However, the 2015 world champion continues to believe it.

In England, Valentino Rossi will have a chassis that Lorenzo may not use. He decides it and not the team. Rossi won’t have more advantages at Silverstone. “We decided together with Ramon (Forcada) not to use them. But in Misano I would try. Rossi and we have the same chances and it will remain so until the end of the season. We are having the same material. The same options.” said Lorenzo.

The Spanish is not bothered about the English weather. “Well, as I said in the previous race, I can’t control the weather and I think that will be the case until I retire. So, it’s best not to think about it and when it rains, I’ll try to do better than last time. I think we’re on the right track.” added the Spanish. 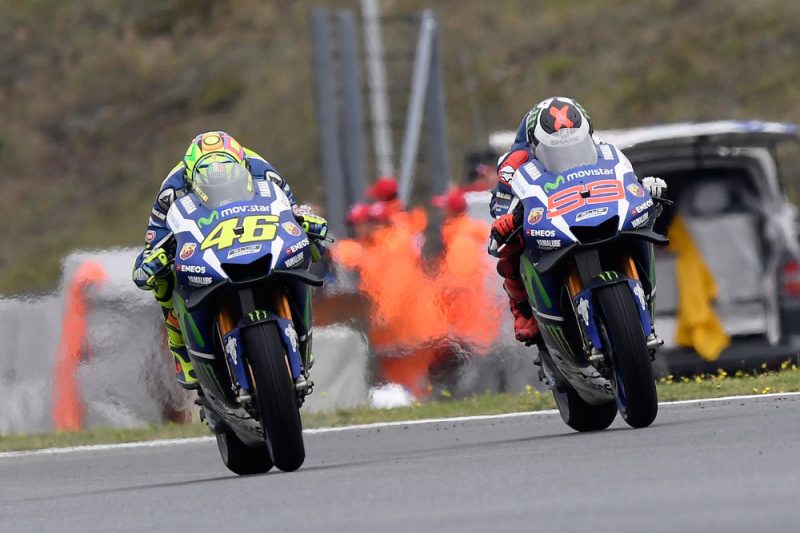 “In Brno, I was faster and more comfortable. It won’t be easy to fight this year to win in conditions of water, but you never know. Depending on the trail you climb on the bike, though it is very good you can win, but it will be difficult because it is a complicated and very different feelings than offers tire Bridgestone. As long as you understand how to force it, especially under braking, it will be difficult to go fast. During the last race, we stopped and see if here, if it rains, we give another.” said Lorenzo.

Marquez is away, but Lorenzo believes he has still some small chance. “We had many wet races. I was very slow, we got behind, losing many points, aside from Argentina and the error Montmelo with Iannone. We lost a lot of points. Can I pass Marc? Possibly. Not likely, but possible. If it happens, we have to be in front, taking first and second all the time. If that happens, in three or four races we were able to think about the Championship, but now, until now, especially after four races so bad, it is better to think race by race and really here to try to get 25 points.” concluded Lorenzo.