The Doctor Series Episode 4 – A career spanning twenty years. Through new engines, new chassis, new enemies and new rules. However, the Doctor has always been at the top as both a sportsman as both a man of charisma.  The chapter 4 of Valentino Rossi – The Doctor series begins. “After 4 races he was already Valentino Rossi.” said Alessio Salucci. “He was very natural. As we see now.”

“I love the bike. I love this life.” said Rossi. The success on the track has a colorful character, from universal appeal in the sports world and a higher profile, perhaps more than any other rider in the history of Grand Prix racing. “When he prepares the bike, he is a kind of doctor. Because he puts together many aspects and variables. It is a kind of university. So he is the doctor. But nobody really knows the 100%.” said Gianluca Falcioni, general director of VR46 Racing Apparel.

Rossi brings in any race all of his talismans. The presence of his childhood mascot in or around his race attire. The beloved pets featured on his bike. All obsessions made possible by Aldo Drudi, its designer. “Fans should immediately recognize the number 46 and the yellow.” said Rossi. The Doctor doesn’t like change. He has a trademark. Everyone can recognize it. 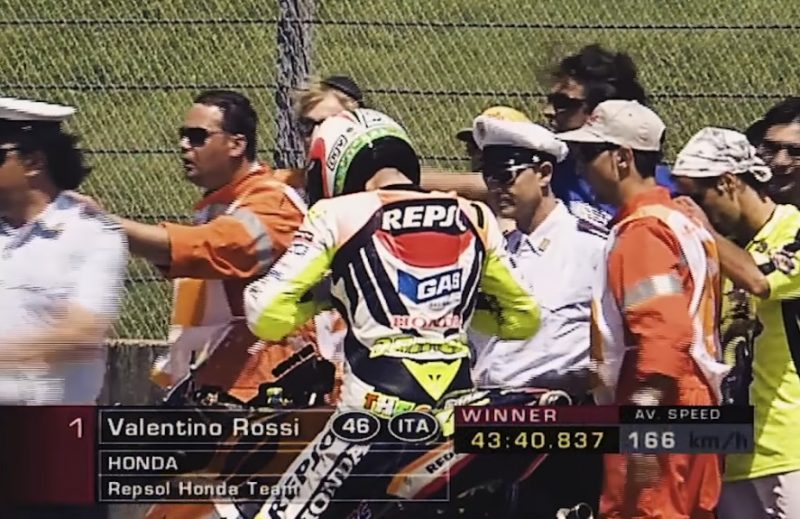 A trademark established in ’90 when the Doctor created some real show at the end of each race. A ritual carried out also by his fan club in Tavullia. A group of friends and then a group of fans. “A real sense of enjoyment, fun, passion, coupled with really super performances.” said Lin Jarvis of Yamaha. The Uccio’s favorite gag is the one of the policemen. A running gag that everybody figured was real. Both riders on the track and many in front of the tv. Or when in Jerez fan club boys showed up dressed as pins, where the last delayed the fall. And the fan club planned that it wouldn’t fall. Then it fell.

The Doctor Series Episode 4: The switch from Honda to Yamaha

The Doctor Series Episode 4 is about a very important moment in the Rossi’s life. The switch from Honda to Yamaha. A choice made because Vale he doesn’t enjoy more. “When he first came to Yamaha he said one of the most important thing is I need to have fun.” said Jarvis. “That’s also why he left his former team because he wasn’t enjoying enough. It became too much hard work.”

The Doctor won immediately. At Welkom in South Africa. A special race for Valentino Rossi. “I think it is my most important victory in my career.” said Rossi. A bike considered a “bad one”, but Valentino understood that he could win. A love affair with the M1, which ended up moving to Ducati. A love that Rossi sealed with a love letter to his bike.

The Doctor loves motorcycles, racing. Especially his ground. Tavullia. A land that allows the Doctor to stay human. “Tavullia is a small place, but a very special place for me.” concluded the Italian champion. An inspiration for the Doctor that Valentino Rossi – The Doctor Series will describe in more detail in its next episode.