Casey – At Sepang, Casey Stoner was there too. The twice world champion and current Ducati test rider drove very well also in Malaysia, showing once again that all his skills. Casey worked very well with the new bike. The Australian will try to develop the perfect bike for Jorge Lorenzo and Andrea Dovizioso. A bike that can immediately win the MotoGP title. Although this year will not be easy.

Casey Stoner regretted the winglets. A very important weapon for the Italian brand. At high speeds, it seems that Ducati is no longer too stable and, then, the team should try to find the right aerodynamic even without the winglets. While the frame already seems to be a strength, especially when cornering. However, Ducati will still have to work a lot. “I don’t know if I can help a lot. Lorenzo spent a lot of time with another constructor, more than anyone else apart from Dani Pedrosa. So, he will take some time before he will fit. Yamaha and Ducati are opposite in many things. I’m not worried about his situation. I guess we’ll have to let work Jorge and Cristian Gabarrini together. So, they will find that balance where he feels good.” said Casey speaking of Jorge Lorenzo. 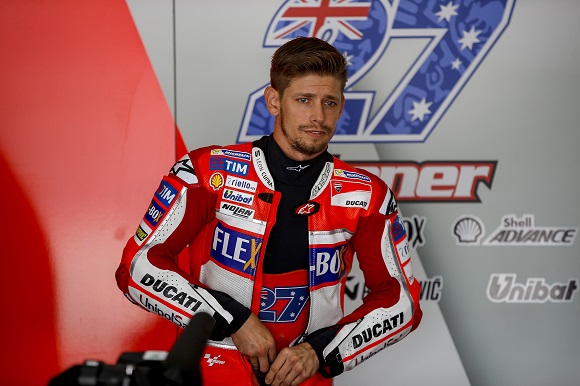 Then, the Australian rider has two certainties. Ducati could win the MotoGP title yet and he won’t race any GP. “I withdrew because I wasn’t fast enough. But because I was no longer interested in running. Instead, do it for short periods, see the same people and get along well. And then go home, that’s what I want.” said Stoner. Maverick Vinales speculated in Sepang that Stoner was withdrawn because he was no longer capable of having the same pitch of other big MotoGP champions.