Another Rejection – At Motegi, Casey Stoner could ride the Ducati bike of Andrea Iannone. But the Australian pilot answered “No, thanks“. Paolo Ciabatti reveals this detail just a few days before the start of the Japanese GP. “We asked Stoner to take the place of Andrea. But he wouldn’t. And he will not ride even in Australia.” said Ciabatti. So, another Rejection for Casey Stoner.

In Japan, only Andrea Dovizioso will be on the grid for Ducati. Because the tester Michele Pirro is in Valencia for the first tests of the new GP17. It’s the bike that Dovizioso and Jorge Lorenzo will test at the end of the season. Pirro will fly to Australia, if Iannone will still injure. 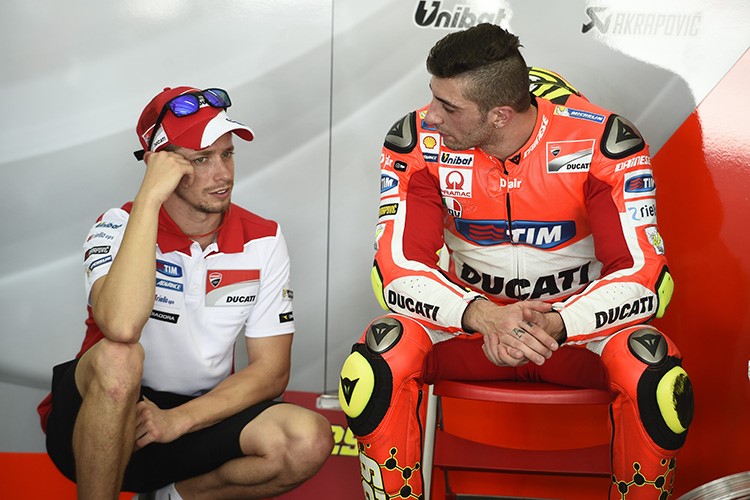 “At the end of the week I’ll make a new TAC. I hope that the vertebra (the third spine) is welded.” explained the Italian rider injured at Misano GP. “I don’t like it. However, I had to fall back on that point it would be very dangerous. The Tac level is important. Also, I must remember what happened in 2015 to Davide Giugliano.” He ran out of racing for three months.

Another Rejection for Casey Stoner, but Iannone will be in Australia

The doctor advises the Ducati rider to continue with rehabilitation. He must wait a few more days. A positive development of the healing process is important. Then, he can decide to return to the track. However, the rider decided to skip the Japan GP. He will return to race at Phillip Island, scheduled for October 21 – 23.

Last year, at Phillip Island, Iannone played an exciting race. He finished on the podium in third place. Maybe the Ducati will have a new chance to win. The next three races seem destined only to the trio that are playing 2016 MotoGP World Title.