Wake – “Marquez and Lorenzo speak about a possible “cookie” between me and Vinales. Why they talk about the Vinales’s wake for my pole position? I think they should have the decency to not talk about it. It’s better. Otherwise, I have to speak again about what happened at the end of last year. However, the envy always taste. It is always cool.” said Valentino Rossi at the end of the Italian GP’s qualifying. The Movistar Yahama rider is in pole position.

“This pole position is important because I was quite worried. In the test I always had a hard time and I wish I could start on the front row. Starting from pole is even better. It is very satisfying.” added Valentino Rossi. “Nice to do it in front of all these people. It’s beautiful, wonderful atmosphere. It is important to start-up in the front row because the first few laps will be difficult. The race starting in front is easier. I’m good with the bike. I feel we’re competitive. In long straight to departure our motorcycle, it’s not so bad. It’s more the Ducati going so strong. However, we have to see the deterioration of the tires and I think we should run with the soft. So it’s going to be a little tough, but it will be for everyone.” 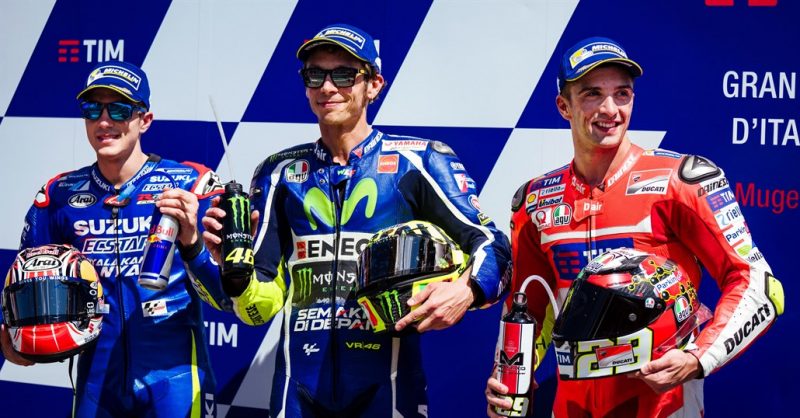 Vinales’s Wake, Lorenzo: “They are free to do so, no regulation against that“

According to Jorge Lorenzo, Rossi would have exploited the wake of Maverick Viñales during the fast lap. ” It’s a legitimate thing. But is the fifth or sixth time that one ‘pulls’ the other. At this point it is difficult to think of a coincidence. It was a strategy and I must say it worked. Until the last lap has never been so fast, then got behind in Vinales and earned a second. Unsportsmanlike behavior, a mindset that does not go well as the copier in the classroom. Viñales has always admired Rossi, anyway is legitimate. They are free to do so, no regulation against that.”

0 0 0 0 0
Previous ArticleHusqvarna 1301, the new Naked Beast is Coming
Next ArticleYoung Spaniard at the Court of Rossi
Comments (0)