Braking Sections – The Mugello circuit, in Italy, is 5,245 meters long, has 9 right turns and 6 left turns. The main straight size 1,141 meters and here the fastest motorcycles have a speed of 350 kilometers per hour. Here the braking section is particularly hard on Brembo brake systems used for all Moto GP races. The other remaining braking sections are not particularly difficult and this allows the brakes to cool. According to Brembo engineers, the Mugello circuit falls into the class of medium difficulty for brakes. On a scale of 1 to 5, the Mugello circuit earned a 3 on the index of difficulty. The same score received by Losail, Austin, Termas de Rio Hondo and Le Mans.

According to data from Brembo, the Mugello circuit has only two single braking section. The first at over 270 km/h and the other at 230 km/h. The 10 braking sections correspond to about 11 minutes total braking throughout the race. The mean deceleration in Mugello circuit equals to 1.06 g. The section braking’s highest peak is 1.4-1.5 g and the minor peak is 0.5-0.7 g. Every pilot during the Mugello GP hit the brakes for a number that exceeds the ton. 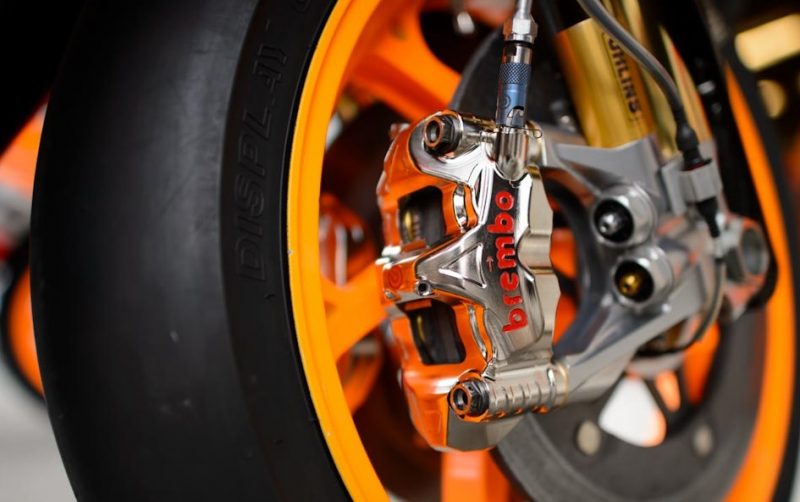 Braking Sections: the harder is the curve San Donato

According to Brembo, the harder is the curve San Donato, 5 curves are of medium difficulty and 4 only slightly challenging. A difficult braking section is after the finish line, because there is a little climb and why the pilots arrive at full speed and in sixth gear. The deceleration is from 351 km/h to 91 km/h in 5.6 seconds, applying a load of 7 kg on the brake lever and about 12 bars of stress on the brake system. The curve Materassi is of medium difficulty. The stopping distance is 146 meters, the load on the brake lever is 5.9 kg and the stress on the braking system is to 10.2 bars. Scarperia, Correntaio and Bucine show the same difficulties. Instead, the descent Casanova-Savelli S-curve, often the scene of overtaking, is a less difficult because the speed is low. Only from 217 to 131 km/h.