Mugello 2003. Valentino Rossi, Loris Capirossi and Max Biaggi would compete for the victory for the duration of the raceway, but at the end Rossi won the Mugello 2003 GP. Second victory in the main class’s GP of Italy. Mugello 2003 was a big battle, made of overtaking and against overtaking, but Valentino Rossi didn’t lose his cool and won with 1,416 seconds ahead of Capirossi.

Valentino Rossi didn’t win since 2008 and this year’s Yamaha rider wants to return to success. Valentino Rossi arrives at the Italians rendezvous at 12 points from Jorge Lorenzo and 7 points from Marc Marquez, thanks to victory in Jerez and the two second places conquered in Termas de Rio Hondo and Le Mans. Mugello will be a great party. However, imagine that could catch fire if it comes back to success. Valentino Rossi wants to write a new chapter in its Mugello’s history. Maybe with a new success, but he will fight against highly motivated drivers. The Italian champion will have to deal with Lorenzo, but especially with Maverick Vinales and Andrea Dovizioso, now men’s market riders. 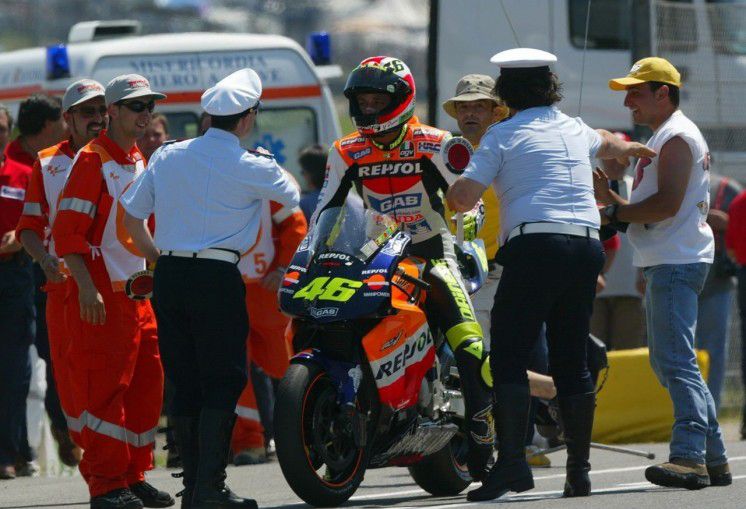 The Moto GP season did not begin in the best way. In the first Grand Prix, the GP of Japan, happened a serious accident to Daijiro Kato, winner of the 2001 world title in 250 classes. The Japanese died in Suzuka circuit. Valentino Rossi and the Honda RC211V won the Moto GP title with 9 victories in the 16 Grands Prix scheduled, ahead of two other great motorcycles carried out by Sete Gibernau (four victories in the year) and Max Biaggi (winner on two occasions). The only other rider to win a Grand Prix in the season it was Loris Capirossi, with the Ducati Desmosedici. He won in Catalunya GP. Obviously Honda won the constructors title, with great benefit, and It preceded Ducati and Yamaha.

0 0 0 0 0
Previous ArticleWhat Is Stressing These People Out?
Next ArticleAndrea Dovizioso remains Officially in Ducati
Comments (0)