2017 MotoGP Title – Jorge Lorenzo knows what he wants to do with Ducati. The Spaniard wants to write his name in the Ducati history. The next MotoGP world championship will be a great challenge. I think. So, obviously, there’s Marc Marquez in pole position with his Honda bike.

He wants to win riding a Ducati and he wants to be the first to do it after Casey Stoner. However, it is not only him to want. Even Paolo Ciabatti believes that with Jorge Lorenzo the Desmosedici will become even more successful. In 2016, it has already won two races. The first in Austria, with Iannone, and then in Malaysia with Dovizioso. 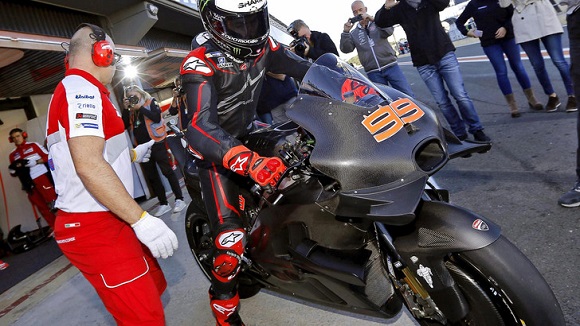 “Jorge will be successful”

“This year, we have a very strong team.” said Ciabatti, Sports Director of Ducati, in an interview with MotoGP.com. “Throughout his career, Jorge Lorenzo raced with a motorcycle of the same manufacturer. So, now you will have to learn to understand a motorcycle that has a completely different character. We know his driving style. The new  bike is designed for his driving style. The engine has a softer delivery. I am very confident. Jorge will be successful. A driver like him, who won three titles in MotoGP, is always able to fight for the 2017 MotoGP Title and the victory.”

“I think that with Jorge and Andrea we can fight for the 2017 MotoGP Title.” added Ciabatti. “We think and we hope that we have built a bike that is suited to win the title. Because the goal is this. Conquer the MotoGP world title.” In my opinion, Ducati could now win the MotoGP title. We must know if Lorenzo can endure the pressure or if his new bike is really competitive. We know that the Italian bike is sometimes indomitable. But Dovizioso knows well it, like Casey Stoner. So, the two may help the Spaniard to join Ducati legend.

0 0 0 0 0
Previous ArticleTriumph Street Triple R and S, The great family grow
Next ArticleYamaha XSR900, What do I think of it in the Real Life?
Comments (0)