2017 Honda RC213V – The new 2017 Honda RC213V has arrived. The Japanese brand presents the new bike in Jakarta and the fans are already dreaming of a new MotoGP title. The presentation was also an opportunity for Marc Marquez and Dani Pedrosa to express the first opinions on Sepang test. The bike showed some problems with power management and electronics adaptation.

“The situation is pretty much the same every year.” said Marc Marquez. “We work hard in preseason sessions. Because obviously we want to win the MotoGP World Championship.” Marquez ended the test of Malaysia in third place. Because he has difficulty managing the new 2017 Honda RC213V. 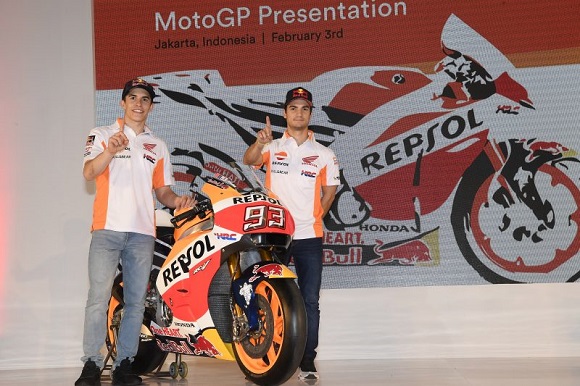 Marc Marquez finds again the smile in Jakarta with the new 2017 Honda RC213V. He likes the bike, but the Spanish rider must still work hard to develop it. I still remember the worried face of the first two days of Sepang tests. Why? Different troubles of electronics and especially an engine almost unmanageable. But during the last day, the Spaniard seemed to have found the right step along with the new Honda.

Marc Marquez and 2017 Honda RC213V will have to fight against Maverick Vinales. The world champion is secure. “I think he can fight for the MotoGP World Championship. And win it. With Valentino. Or Pedrosa. Lorenzo struggles, but it’s early days. However, I believe the two Yamaha will be the hardest to overcome for the Title.”

“Maverick is running strong. He likes the new Yamaha. But when the races start, all will be completely different. I don’t know who will be more dangerous. Valentino has more experience and every Sunday he wants to win. Although as pure speed, lap, I see stronger Maverick. I hope that they quarrel. However, I’m not certain. Because if you argue with someone ends, you would become stronger. Because you try to beat him. So, in the end, it’s the first rule of this world, beat your teammate.” concluded Marquez.