2016 German GP – “I could fit 2-3 turns before but would not change much. I was coming up. More than the strategy, since it came with Dovizioso and Crutchlow who moved up to the podium. The truth is that when I got back on track I really plan. I was taking so much effort. It remains to be seen if it happened because we had the interim and not slicks. Maybe we struggled more.” Valentino Rossi was disappointed at the end of the 2016 German GP.

“Under these conditions, our bike it is very difficult to ride. I’m not very good. I took 10 seconds behind Dovizioso and Crutchlow. I couldn’t stay on track. Then, I was able to beat Pedrosa and not to get beat by Miller, coming sixth. It was unfortunate. In case of dry i would have been competitive, even in a wet race all I could fight for victory. Instead, I made eighth, and is a missed opportunity to earn some points.” added Rossi at the end of the 2016 German GP.

“If we were left with the soft maybe it would go better, but when the track dries out if you have the rain is destroyed. I wouldn’t be able to get through to the end.” he added. “There’s a motorcycle exchange arrangement with the box warn me when there’s someone who’s already the slick and starts to go strong. But I’m on the bike and I deciding. This error, if we can call it, it’s still a son of the result of the first part of the race. Marquez had done straight. I was not competitive and therefore I risked. Dovizioso and I we were lying, we had a good pace and it was difficult to choose to stop“. 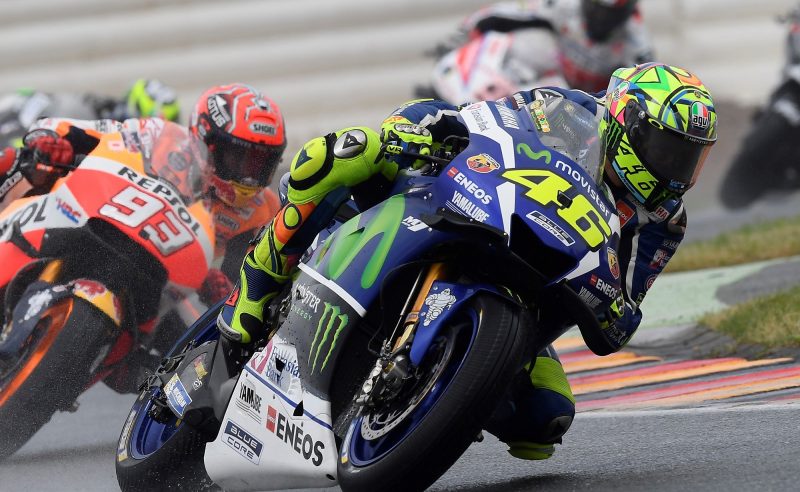 Marc Marquez has really extended his MotoGP championship lead as he took the bet of changing tyres at the right time. This bet really paid off for him at the right time. His 2016 German GP victory can be credited to his change of wet to slick tyre change. Sachsering saw heavy rainfall just before the main race event. Everyone knew that wet tyres were the obvious choice for the races. During the first half the entire track was wet, but there was a slight dry line appeared after the first half.

Danilo Petrucci cleared the way for Pramac Ducati ahead of Valentoni Rossi, Andrea Dovizioso and Jack Miller. Petrucci had a hard luck on the 10th Lap, while Marquez was really lucky after he survived a crash, but he went to the 8th position trying to avoid the crash. The pit stops became common after sometime, but this time riders were taking the options of two intermediate tyres. But Loris Baz opted for Front intermediate tyre and the rear one was the slick tyre.

Marques on the other hand stopped at the pit to change to two slick tyres and really did an amazing job. His bet really paid off, when he changed the tyres and completed the laps really quickly. He was sweeping the riders really fast and went on to win the Moto GP. Cal and Andrea finished 2nd and 3rd in the race respectively. It was really an amazing win for the Spaniard.

0 0 0 0 0
Previous ArticleThree Crashes: A difficult weekend for Lorenzo
Next ArticleHappy and No Happy: Marquez and Yamaha
Comments (2)