Michael Mick Doohan was a great champion. And we all know him. The former Australian rider is still considered one of the most important star of motorcycling despite he retired in 1999.

After three titles in four years in MotoGP, also Marc Marquez is a great champion of MotoGP class. Carmelo Ezpeleta says it in a recent interview. The number one of Dorna says that the 2016 world champion are not at the level of another MotoGP legend. Michael “Mick” Doohan.

Ezpeleta wanted the Cervera rider in MotoGP. So, he pushed to cut the rookie rule, which did not allow “beginners” to join an Official MotoGP team. Why today Carmelo thinks so? Dorna CEO doesn’t think that Marc Marquez is not a champion. He believes that Michael “Mick” Doohan with its five consecutive world titles in the 500 is still an absolute reference.

The number one of MotoGP acknowledges that Marquez has ten years younger than Doohan retirement and so we should see what he will do at the end of his racing life to make a true comparison. 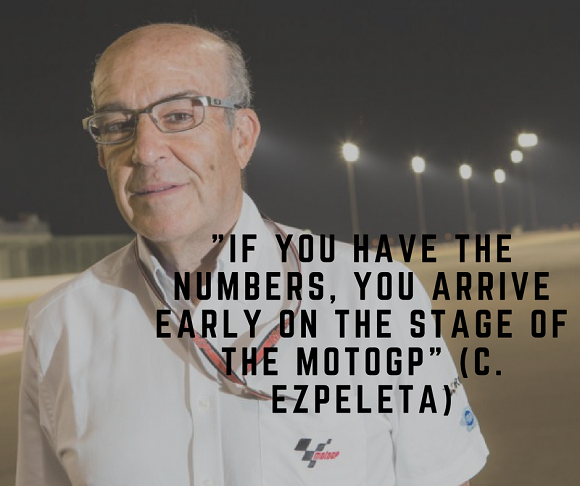 Carmelo Ezpeleta, the Show Must Go On

Ezpeleta also says to expect three final races very spectacular. Because Marquez is free to run without pressure. Then, Rossi and Lorenzo will fight for the MotoGP vice-champion crown. All for the benefit of the show. Now, MotoGP is at Phillip Island in Australia. Land of the legendary Michael “Mick” Doohan.

Michelin creates a New Tire for the 2016 Australian GP

The characteristics of the Australian track are much different from the earlier. So, Michelin creates a new tire. It’s right for the particular track asphalt. The riders will have three compounds for the front, which is the soft, medium and hard, together with two completely new compounds for the rear.

0 0 0 0 0
Previous ArticleYamaha X-MAX 300, Do you Desire the Sport Scooter?
Next ArticlePhillip Island GP, Rossi Wants to Be the Vice Champion
Comments (1)