Flamigni – How important is the electronics for a successful performance in MotoGP races? What is the relationship between technology and pilot’s talent? What has changed the approach to the races with the novelties introduced from this year in MotoGP? Data engineer Matteo Flamigni, for years along Valentino Rossi in the Yamaha team, is probably the expert who better than anyone else can answer these questions.

Electronics applied to MotoGP has become increasingly complex and advanced. Since 2016 all constructors and teams involved in the MotoGP World Championship using the unique unit and the control software. Quite a change, given that the electronics are now essential to be competitive. Flamigni knows well. Since 2004 collects, analyzes and manages data on performance of Valentino Rossi. His analysis, explains in an interview to Motorsport-Total.com, “is the best starting point to take on a race.”

The data is in a great server inside the box and tested all the time. Especially during the race weekend. “On Thursday, we check the data of the previous year.” says Matteo Flamigni. “We want to get an idea of what we did. It is a very important step. From the same data, among other things, you can draw a sketch of the pilot and a picture of the evolution of his performances over the years. Valentino, such as, is very stable, very right when the bike is working well. He has an amazing constancy.” 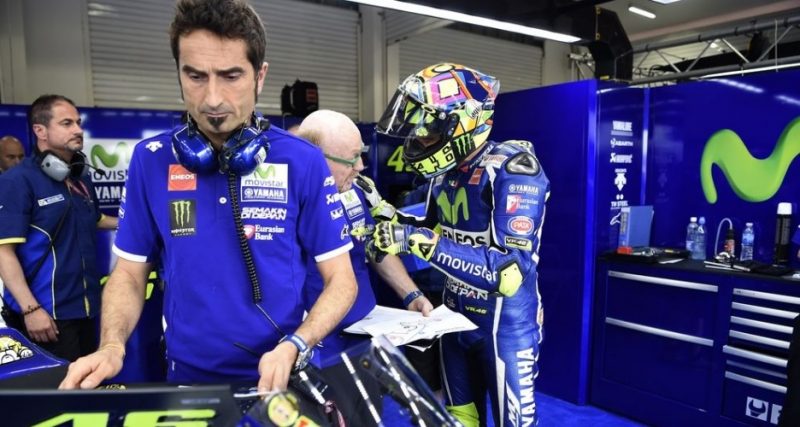 Matteo Flamigni: “Fortunately, Rossi tells you exactly the exact spot where he had a problem”

The feedback from Valentino are very detailed. “This is a strong point of Rossi. He helps a lot. You can imagine the amount of data that I have to analyze.” adds Flamigni. “Fortunately, he tells you exactly the exact spot where he had a problem. So, I can get the cause”. What makes the Valentino’s style so special than the other drivers? “His braking is very distinctive. It’s something he does very well. He rides very quickly in the fast corners. There is much to say about a pilot.”

The time of “rest”, for a data engineer, arrives at the bottom when it starts the race. The work on data will be then. You think just to get to the finish line. “I can’t do anything but watch my pilot fighting for victory.” said Flamigni.