Lin Jarvis takes stock of 2017 Yamaha MotoGP season. The Yamaha team won 3 of the first 5 GPs with Vinales, and they couldn’t imagine that they went soon out of the fight for 2017 MotoGP title. “Problems started before Le Mans. In Jerez, in 2016, Valentino had dominated, and it was a great surprise to see how hard we struggled. The thing happened again in Barcelona, another good track and we realized we had problems on tracks with little grip”. Lin Jarvis said. 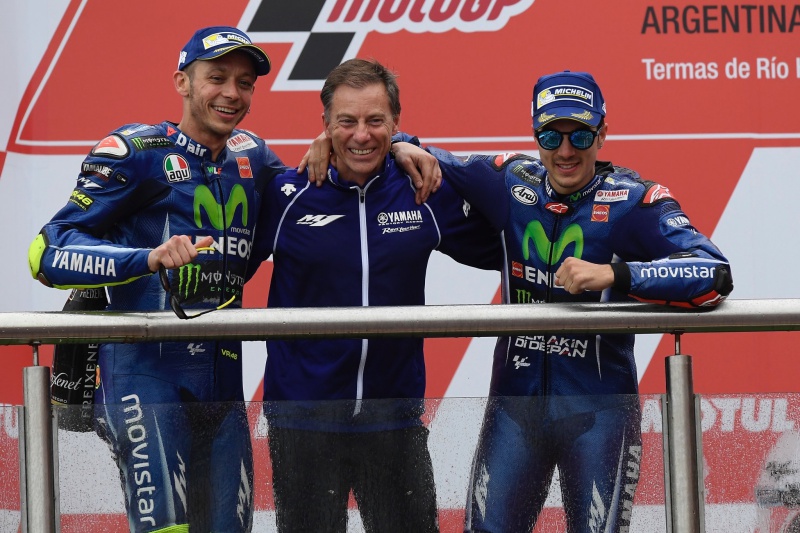 “This year we have experienced tire consistency problems several times, although it is not an excuse. Michelin reiterated that it had not changed the construction of the rear tire, but we have felt something different. Also, during the season we tried a lot of looms. We knew the merits and defects of the 2016 chassis and developed a development to improve the life of the tires. In winter, we seemed to have gone in the right direction, and the first races also said so. In the tests, Valentino wanted to try the 2016 chassis again, but since we were in trouble we expected”.

“It was a hard year for him. A winter always in front of others, then he won the first races, he had high confidence and started the trouble. It’s difficult, even harder if you lose a 30 point advantage. Rossi is more experienced in this”.

For Vale, the problem was clear from the beginning. You preferred Vinales during then 2017 Yamaha MotoGP season. “The results were there. If you’re in front of you and win, you think it’s the right direction. Maverick is not alone, he has his team, and nothing would have prevented him from taking the right path. In Ducati, Lorenzo has always used fins, Dovizioso no. We impose nothing on pilots.”

“What happened is not the result of Jorge’s lack, but of the direction taken. He also struggled. I am surprised that he didn’t win a race in the final. But after seeing how competitive the bike was with Andrea, I thought it was”.

In Valencia, there was the episode of ignored messages. “After the sixth message, it was bizarre to see he did not follow the instructions. I would have expected that before the race they had talked about it and that they would have moved to see if Dovizioso could recover”.

What are the best moments of 2017 Yamaha MotoGP season?

“Our strength at the start of the season, Maverick was impressive. Another great moment was Valentino’s victory in Assen, as the return from injury. There was the 500th Yamaha triumph at Le Mans. Zarco impressed me on the track and out. It was not the first choice of any team, but now so many are interested. KTM for example. The 2016 bike is not the right one to win, and indeed, we won’t give him the bike at the end of 2017.”

Will Rossi continue after 2019?

“His motivation will also depend on the performance of the bike. In winter I hope to be able to talk to him to understand his intentions, but I think he will decide after 3-4 races. If it were to stop, we would be prepared and, of course, Zarco would be one of the candidates. 2018 will be important, except for the pilots of Marc VdS and Crutchlow, everyone will be free.”

0 0 0 0 0
Previous ArticleJoan Mir: New Helmet for two days of testing in Jerez [GALLERY]
Next ArticleAndrea Iannone is sad but He is the the fastest in Jerez de la Frontera
Comments (0)