Ducati Monster 1200 R – Monster 1200 R is an “object” even more extreme. A real Ducati bike. It is also fun to drive on the road. The look is very similar to the other 1200. But if you look carefully, it has very little like that. The tail has a new design. Now it is taller and slender (also loses the passenger handles), who returns to host the plate in place “standard” and of course the classic “fingernail” that covers the back part of the seat when traveling alone. There are also forged Marchesini wheels. So, the bike saves weight. It is essential.

Now there’s a new double terminal. The “R” covering also aggressive on weight protection the radiator. While the front carbon mudguard on innovations, a small fairing over the lighthouse. But especially the öhlins, in a total black look. There’s still the TFT color display (like the Panigale) with different data depending on the riding mode, apparently more essential in sports, where the tachometer is in the center. The electronics are not lacking, as the traction control on eight levels. Drive it down the street is a very fulfilling experience, you know what would be at ease even in the fold between the curbs. But, the Ducati Monster 1200 R is also suitable to go to the mountains or in the office. 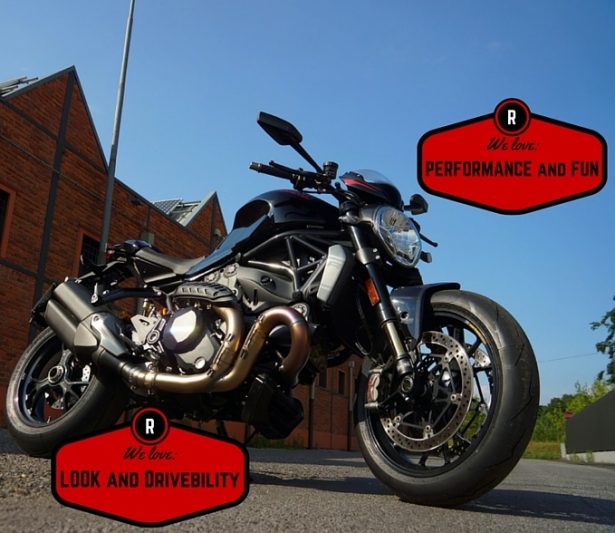 The Monster 1200 R’s engine is aggressive and dominant. But it does not lose sight of the delivery and the pleasure even in the first part of the tachometer. 160 HP @ 9,250 RPM (15 of 1200 S and 500 RPM), with a pair of 131.4 mm at 7,750. The delivery is “bad.” But not hysterical. It has the spirit of “S,” no bend the rules, but enriching it with a healthy dose of nastiness at high RPM. Interventions that have resulted in the growth of benefits related to the compression ratio, which rises to 13:1 (was 12.5:1). Thanks to thinner cylinder crankcase gaskets, but also the exhaust manifolds, by 8 mm (58 in total). 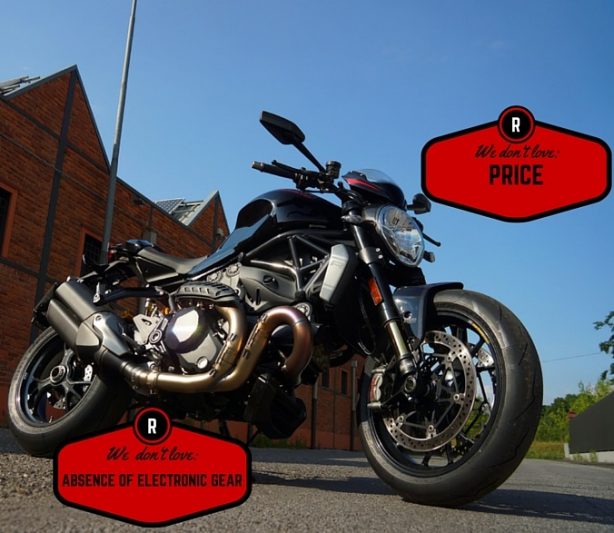 The chassis is the same as the “S.” Fork changes color, and it is more aggressive. Instead, the hardware is the same. Modify the settings and adjustable Ohlins steering damper makes a debut. The main changes are an increased height of 15 mm and a rear tire from OE 200. We find the Pirelli Diablo Supercorsa SP. The “R” slimming of 2 Kg dry weight, forged wheels and tail again. The 1200 R is available in classic red or black. But we prefer the dark version. 18,490 euros for the red version, +200 euros for the Thrilling Black. 2,500 euros more a 1200 S, 5,000 than the 1200 classic version.

0 0 0 0 0
Previous ArticleKawasaki R2, a new Supercharged Sportbike is Coming
Next ArticleValentino Rossi Face Helmet for Sale: The last invention is inspired by the Mexican people
Comments (1)