Kickboxer – In 2009 a fantastic project began. When a designer known as Ian McElroy made a series of Solidworks CAD drawings to a new custom motorcycle, the “Kickboxer”. The idea was to create a Subaru WRX 2.5-liter-powered motorcycle.

Although the idea seemed to have been abandoned, Marcel van Hooijdonk, a toolmaker from New Zealand, decided to transform the project into a two wheel itself. Van Hooijdonk took the boxer engine, the wheels, a wood and a couple of beers for clearing his mind. Finally, he said that the project is possible. The most complex thing to be built was again the front swing arm and center steering. Because they had to be approved by the authorities of New Zealand to be legal. 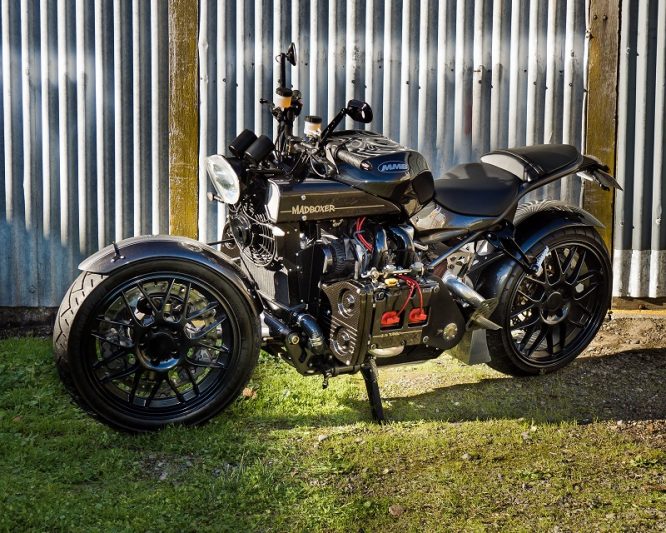 The electrical backbone of the whole system was very important

Subsequently, the engine was coupled with a stripped and modified two-speed automatic transmission with torque converter. Then, it has to switch gears on the left handlebar. The rear brake of the Kickboxer is on the right side of the bars. Because Marcel didn’t want any foot operated controls. Buell has made the front brakes, while the tank and seat were taken from various Japanese motorcycle. Then, talented craftsman realized other components such as guards, steering parts, swingarms, chassis, and other small bits. The electrical backbone of the whole system was very important. All of the electrics and the lithium ion battery had to be put under the seat. Because space was very limited. Marcel van Hooijdonk said it took him over a year to sort the electrics out. 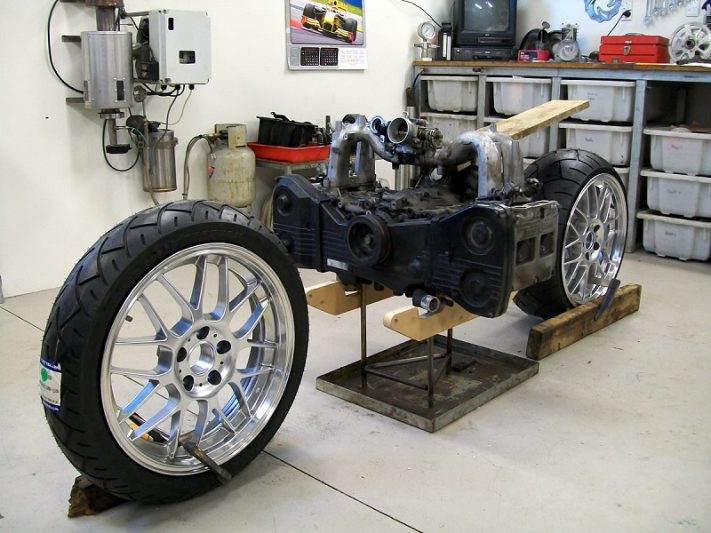 The Subaru WRX is nice but not very modern, very flashy. It is impossible to go unnoticed, with the huge rear wing, the four tailpipes and the bonnet with wide air intake to cool the intercooler. As per tradition, it has a four-cylinder boxer turbo engine (2.5 with 300 horses), has all-wheel drive and is equipped with a six-speed manual transmission (with maneuverability a bit difficult). The WRX has considerable potential, but you need to know to drive. In everyday driving, instead, “suffers” a bit. There is no great comfort, consumption is high and the motor is not optimal at low revs.