Jorge Lorenzo  – Jorge Lorenzo does not shine in Qatar. The first of the Spanish race in Ducati ends in disappointment. If you think that Andrea Dovizioso, his teammate, arrived at the podium. So, the Ducati’s pilot does not seem to be serene. In fact, Jorge is fighting again on Twitter. This time with a fan.

After Qatar, Ducati does not go on vacation. In fact, the Italian team is in Jerez de la Frontera for a private test session. Meanwhile, Jorge Lorenzo is once again the protagonist of an unpleasant discussion on social network. After the fight with Mat Oxley, the Spaniard had a fight with a fan. “We can say that behind Lorenzo, the second with the most victories at Losail is Ramon Forcada with 4.” wrote Ernest Riveras, a Spanish Motorsport journalist.

Jorge Lorenzo: “They are just as important the goalkeeper, striker and also the coach.”

“Juan Llansá with 6 then he is too much?” replied Jorge Lorenzo, referring to a mechanic who compared to Forcada decided to follow him in his new adventure. “The comment I did it simply because Ernest Riveras (Director of Movistar TV) pointed out on tv that you were at 6 and in second place was Forcada with 4.” continued the fan. 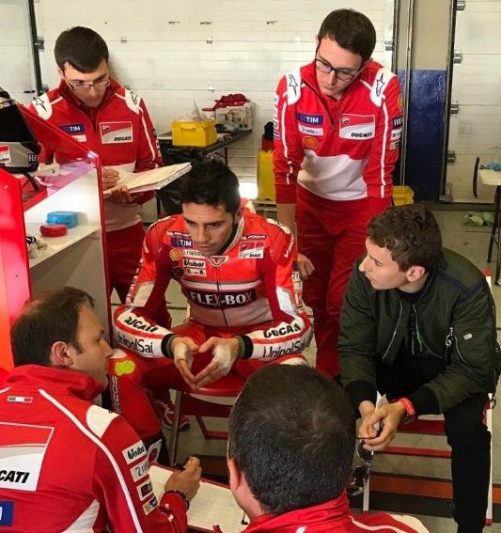 “If the mechanics can be considered winners of a race. So, even those of telemetry should be worth the same.” he continued to respond Lorenzo, who closed the discussion with a last tweet. “They are just as important the goalkeeper, striker and also the coach.”

Finally, JL99 closed with a smile

However, everything seems to end with a smile. “Lorenzo was a nice comment. Of course, Juanito has 6, but 8 Jarvis and not called. A greeting.” wrote the fan, who received a final response from the pilot: “Carmelo tiene 51“.